SAN FRANCISCO (April 15, 2021) — Law firms piloting the Mansfield Rule since its inception have grown the racial and ethnic diversity of their top leadership, including diversifying their Management Committees by more than 30 times the rate of non-Mansfield firms.

The inaugural 1.0 Mansfield Rule certification process, launched by Diversity Lab in summer 2017, required firms to measure and confirm that they considered candidate pools that are at least 30% diverse — including women and underrepresented racial and ethnic lawyers as a starting point — when hiring senior associates and partners, promoting into the equity partnership and selecting leaders for management roles. (LGBTQ+ lawyers and lawyers with disabilities were added in the 2.0 and 3.0 versions.)

An analysis of the MCCA data of “early adopter” firms that have completed the first two Mansfield Rule certification cycles — from 2017 to 2018 and 2018 to 2019 — highlights that these firms are succeeding at the Rule’s intended purpose of increasing diversity in top leadership and are significantly outpacing similarly sized non-Mansfield Rule firms in doing so. 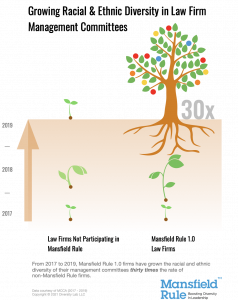 Mansfield Rule has grown from 41 participating firms in 2017 to nearly 120 firms, and its focus on inclusive representation in law firm leadership has expanded to include LGBTQ+ lawyers and lawyers with disabilities. There are also new versions crafted specifically for and piloted by more than 20 midsize firms and 50 corporate legal departments. A version for UK law firms launches this spring.

The Mansfield Rule firms’ success highlights the advantage of a long-term commitment to these principles combined with the accountability of the certification process. The culture of collective knowledge sharing embedded in the Mansfield Rule has also supported these firms in establishing and maintaining new foundational talent practices. These practices and the discipline associated with the 30 percent consideration metric have produced and will sustain these firms’ continued progress.

“These firms have operationalized the Mansfield Rule’s principles so that their achievements are part of a movement rather than a moment. As a result, these gains are not vulnerable to the shifting winds of the marketplace,” said Lisa Kirby, Diversity Lab’s Chief Business Intelligence & Knowledge Sharing Officer.

Many of the recent participating firms’ individual results can be found here.

Firms that meet or exceed the required Mansfield Rule parameters are certified and provided with an opportunity to send their newly promoted diverse partners to Client Forums to meet and get to know hundreds of influential legal department leaders.

Law firms and legal departments interested in registering for the next certification cycle (open now) in the U.S., Canada or the UK can do so by clicking here.