‘Mansfield Rule’ – the next generation of the Rooney Rule – certifies that law firms consider at least 30% women, LGBTQ+ and minority lawyers for significant leadership roles

The Mansfield Rule was one of the winning ideas from the 2016 Women in Law Hackathon hosted by Diversity Lab in collaboration with Bloomberg Law and Stanford Law School.

Diversity Lab partnered with nearly 50 of the country’s leading law firms to pilot the inaugural version of the Mansfield Rule in 2017. There are now 64 law firms qualified as Mansfield Certified as part of version 2.0, which ran July 2018 to July 2019.  The list of firms and more details can be found on the press release linked here.

Participating law firms are expected to consider a diverse slate of candidates for the following roles, committees, and leadership activities. They are also encouraged to create and post job descriptions for these leadership roles and ensure that the processes for election and/or appointment to these roles are transparent and accessible to all lawyers.

For example, if firm management has identified a short list of five candidates for an opening on the executive committee, under the Mansfield Rule guidelines, two of the candidates would need to be women, attorneys of color and LGBTQ+. Firms that consider diverse lawyers for 70% or more of their leadership committees/roles that exist at the firm and are open during the review period qualify to become Mansfield Certified.

The Evolution of the Mansfield Rule

The Mansfield Rule was inspired by the NFL’s Rooney Rule, which was created by the late Dan Rooney in 2003 and is now supported by his son, Art Rooney II, President of the Pittsburgh Steelers. The Rooney Rule requires every NFL team to interview at least one minority candidate for head coach vacancies. In the years following its implementation, the number of minorities hired to fill head-coach roles doubled. New research, which controlled for other factors that may have contributed to this positive outcome, shows that a diverse candidate is about 20 percent more likely to fill an NFL head coaching vacancy during the Rooney era than before the rule was introduced.

Mansfield Rule raised the bar on expectations, having learned from the Rooney Rule outcomes, by requiring law firms to consider 30 percent women and attorneys of color for all leadership roles as well as lateral hiring and promotions to partner as part of the 1.0 version in 2017.

Mansfield Rule 2.0, the next iteration of the Rule, ran from July 2018 to July 2019 and included LGBTQ+ lawyers in addition to women and attorneys of color.  Also new, Mansfield 2.0 measured consideration for participation in client pitch meetings and requested that participating law firms make appointment and election processes transparent to all lawyers in their firms.

Mansfield 2.0 results showed a significant surge in the diversity of firms’ candidate pools for leadership roles, equity partner promotions, and lateral hiring. Some of the key data points include:

Data collected from the Mansfield 2.0 participating law firms shows that they are not only diversifying their candidate pools, but they are also meaningfully increasing the representation of diverse lawyers in senior lateral hiring, leadership positions, and participation in client pitches. For example, in comparing the previous 12-month time period to this year’s certification period:

The Mansfield Rule’s principles are supported by research findings that law firms with women in leadership roles have more women lawyers overall and 5 percent more women equity partners on average. “When up-and-coming women lawyers look ahead and see women in leadership roles, it signals to them that there is a path to success at the firm for women and other diverse lawyers,” said Lisa Kirby, Diversity Lab’s Chief Business & Knowledge Sharing Officer.

Buchanan Ingersoll & Rooney – which has a direct connection to the Rooney Rule through its named partner Art Rooney II, President of the Pittsburgh Steelers – is also piloting the Mansfield Rule. “My father would be proud to know that we are working together as a community to transition the Rooney Rule into the legal profession. He was a true believer in diversity and collaboration, so this is the perfect way to honor his legacy,” Rooney said. “I am thrilled to support and take part in such a large and meaningful effort – with so many prestigious law firms – to diversify the legal profession at the highest levels.”

“While one year — and even two years — is certainly not enough time to completely uproot old processes and change law firm cultures, these early indicators show that the Mansfield Rule’s discipline and accountability measures are already disrupting dialogues and practices within firms,” said Ulrich Stacy. “We will continue to collect data, measure the outcomes, and share the results publicly.”

Legal Department & Other Industry Support for the Mansfield Rule

“Mansfield Certified” firms have the opportunity to send their recently promoted diverse partners to a two-day Client Forum in late 2019 to build relationships with and learn from influential in-house counsel. More than 70 legal departments have signed on to support this effort by attending a Client Forum, including:

“Diversity and inclusion is a defining characteristic of our culture at U.S. Bank. To perform optimally, now and into the future, we know we need the best collection of diverse minds in our legal department and at our outside law firms. That’s why I’m honored to have this opportunity to recognize outside counsel that share these values at the Mansfield Client Forums,” said James L. Chosy, Executive Vice President and General Counsel, U.S. Bank.

“​MassMutual is delighted to attend the Mansfield 2.0 Client Forums to further our support for these law firms who are taking on new challenges to advance diversity. We look forward to connecting with these firms’ newly promoted diverse partners,” said Mike O’Connor, General Counsel at MassMutual.

“We believe diversity and inclusion help make us a more innovative and competitive company, and the same is true for our suppliers and outside 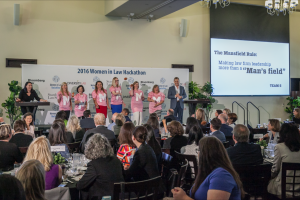 counsel. The Mansfield Rule Client Forum is an innovative way for us to recognize law firms that are trying something new to further boost diversity in their top ranks,” said Ivan Fong, Senior Vice President, Legal Affairs & General Counsel of 3M.

Other legal industry leaders have shown considerable support for the Mansfield Rule as well. American Law Media has added a new searchable feature in their Legal Compass technology that allows in-house counsel to search for law firms that are “in progress” or Mansfield Certified.

“The adoption of the Mansfield Rule is critical to the legal profession, as what gets measured often gets managed,” said Patrick Fuller, Vice President, Legal of ALM Intelligence. “By making Mansfield Rule participation identifiable and searchable on Legal Compass, it enables legal departments to quickly identify firms that have made a commitment to diversity.”

Please note: The Mansfield Rule is designed to promote diversity in law firm leadership across a variety of activities. For the Rule’s principles to function effectively, participating firms must engage in a substantial volume of hiring, promotions, and leadership transitions during the course of the twelve-month certification period. For this reason, generally speaking, firms with fewer than approximately 100 lawyers will not be in a position to implement the rule in the way it is intended.